Imagine my joy when my husband told me that my favourite podcast, Film Photography Project, will have a meet-up and photowalk close to Toronto! I have been listening to the show (what show?!) for a few years now. However due to my proximity to the previous locations and my overall busy schedule I can only settle with listening to the show’s photowalk recaps and wish that I can attend next time it happens.

After several discussions we decided to embark on a weekend trip to Ann Arbor, Michigan where the meet-up will be held. Now before I continue with my story let me insert a caveat here: This blog entry is going to be long. I hope I won’t bore you reading as this will be accompanied by photos, but in any event feel free to browse just the photos. If you want to read what I have to say, then please, go grab some coffee or tea some snacks, in case you get hungry or thirsty. You can also check the official tags in Instagram and Flickr and see what photos my fellow attendees have taken.

Soon after October 3 arrived and off we went. We took the 1am Greyhound Bus and slept in during the Canadian route of the trip. We woke up and we were in Windsor and soon enough we took off the bus to report to the US border before continuing the trip to Detroit where our Ann Arbor bus awaits. 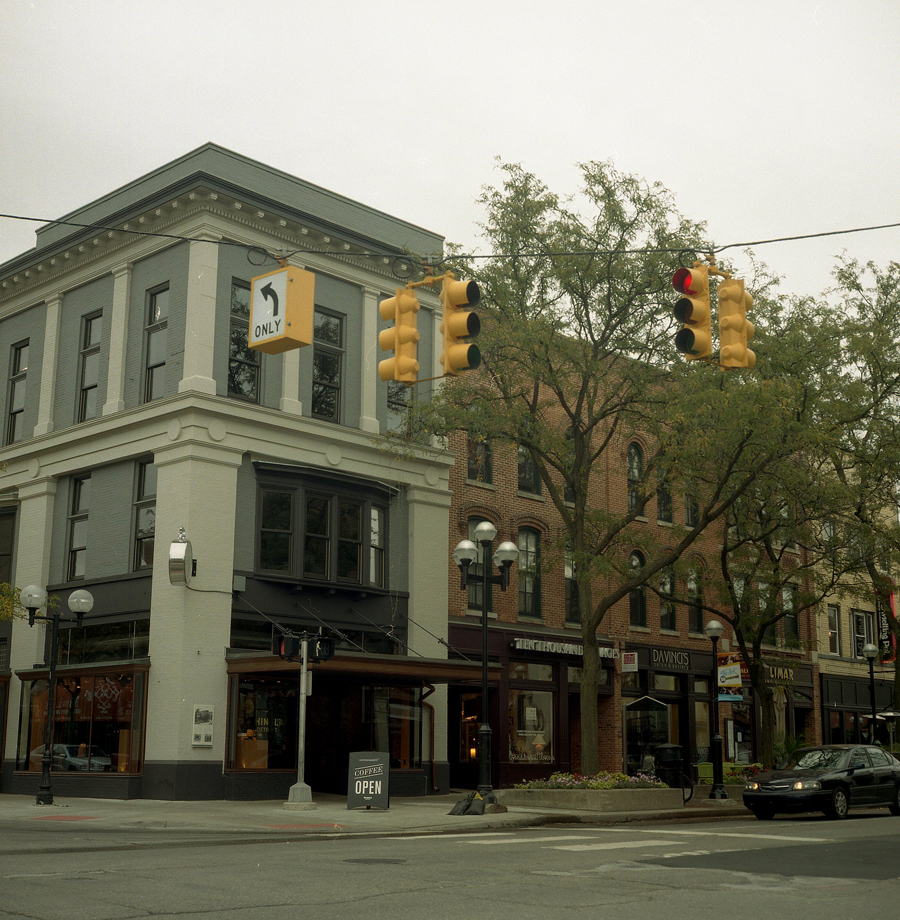 We arrived in Ann Arbor around 8:30 in the morning. Kelvin was trying to figure out where we should go as he referred to the map that he has prepared for our trip. We soon arrived at Camera Mall (518 E Washington Street) where Kat, a fellow attendee and a Michigan local, has welcomed us with doughnuts to share.

We then entered Camera Mall as more attendees arrive, mostly from the US. I kindly ask Desmond if I can borrow their washroom to freshen up – we arrived from a midnight bus after all. After that Kelvin and I ate our small packed breakfast of tuna omusubi and drank cans of strong Korean coffee. We definitely needed caffeine to get through the day. I also decided to get some film from Camera mall for good measure. I prepared by buying Ektar (for the fall images) however it was too late when I found out that it will be overcast and rainy that day. So I decided to get a couple of Portra 400 and accompanied by a “surprise” roll of Ilford HP5+ that we found randomly in one of our camera bags. 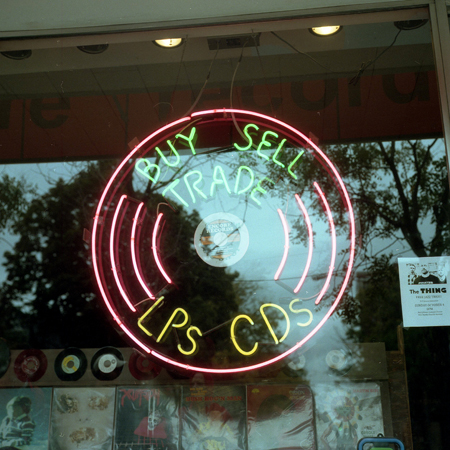 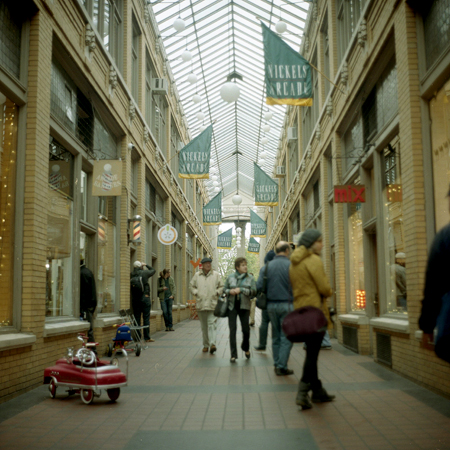 Soon after more people have arrived and Camera Mall is busy as ever. We also saw fellow Canadians Alex, Chrissie, and John (Alex and John are the hosts of my other favourite podcast, Classic Camera Revival). Camera Mall team has prepared apples, granola and fig bars, water, and coffee for everyone as we wait for the FPP Dream Team Mike, Mat, and Leslie. Mark from A3C3 has started to hand in the name tags while we wait, take photos, eat/drink, and chat as we warm ourselves up – it has been damp, rainy, windy, and cold in Ann Arbor. 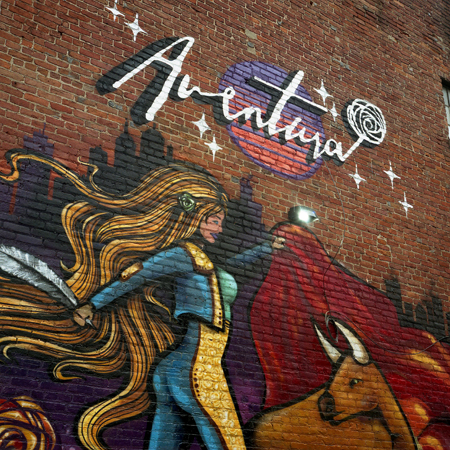 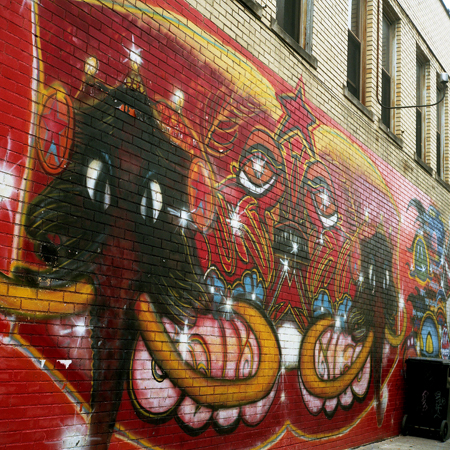 Soon enough the main gang arrived and as we eat we took our goodie bags and lanyards from Adrienne (also from A3C3). Mark has delivered instructions and we dispersed in small groups as we start our photowalk. Thomas, who led our group, brought us to the Kiwanis sale, and then we kept on walking, taking photos. I really like the college town vibe of Ann Arbor; it somehow reminds me of Hamilton, ON. We arrived at the Nickels Arcade, and then to the U of Michigan grounds, towards the law library. Everyone got a bit busy taking photos so we ended up splitting, and then Kelvin and I decided to head back to Camera Mall shortly after noon. 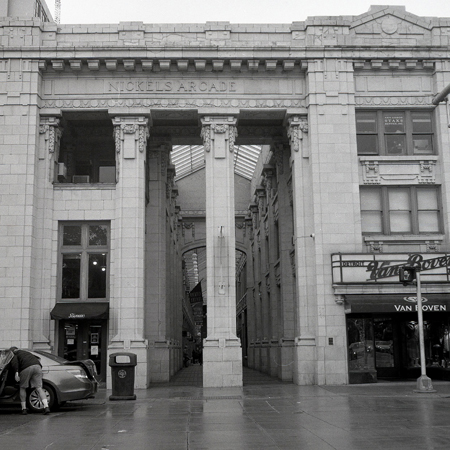 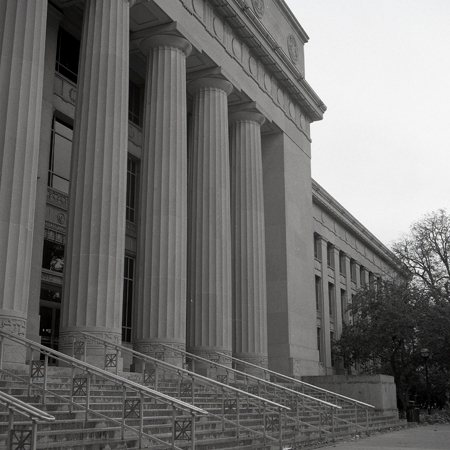 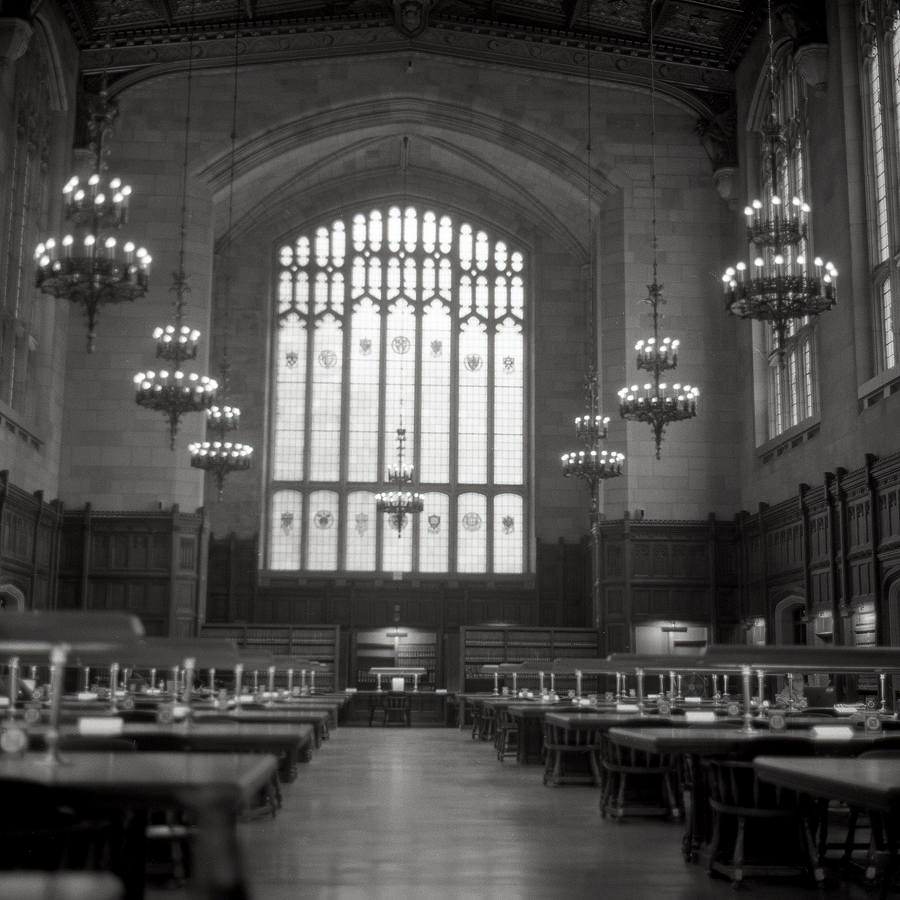 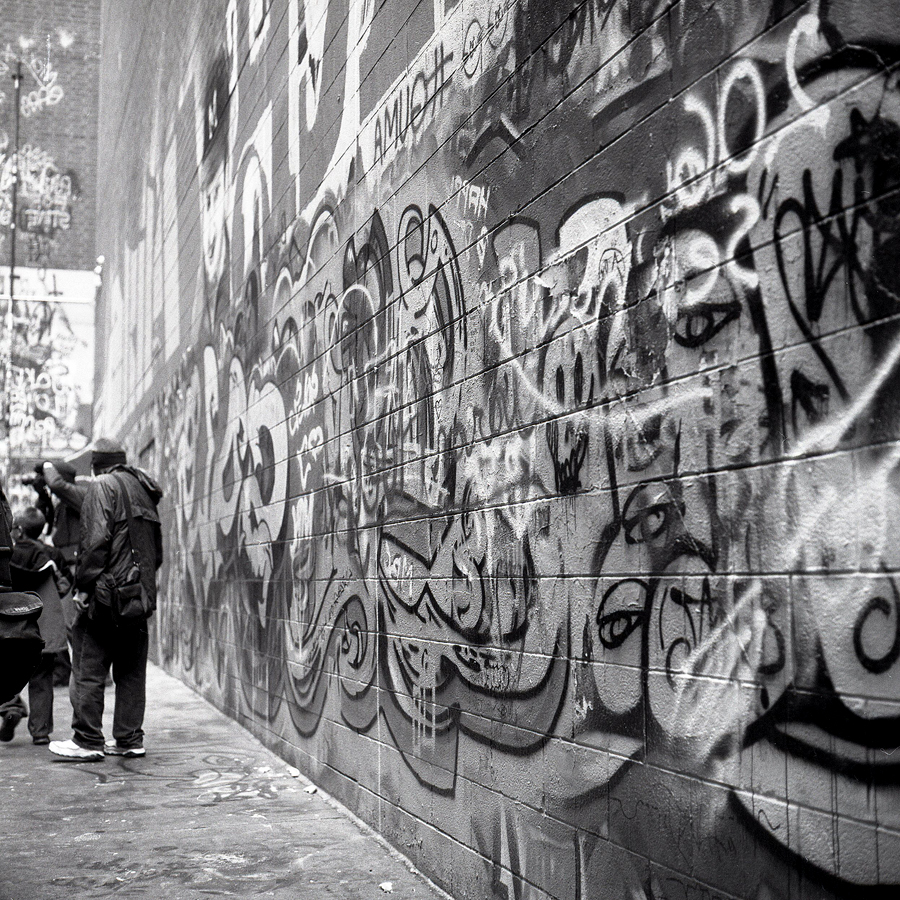 After getting more coffee and water, we then decided to eat lunch at Blimpy (304 S Ashley Street). My husband had a… rather interesting experience ordering our meal which led to one couple (a local and possibly a regular) approaching us and checked if we were OK. After a brief chat we engulfed our meal (we were famished) and after I freshen up and we prepare for the next round of walk, we headed towards Washington and Main and met with the rest of the group. 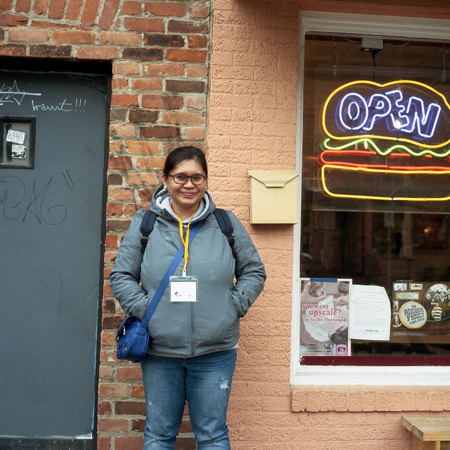 Now let me take the time to mention the awesome people that we have met. Katie was from my photowalk group and had a pleasure of chatting with her. Also turned out that she already follows me on Twitter as a film lover contact. Lance was also someone that I already talk to Twitter and we finally met! Also on our photowalk team were Scott, Michael, and Nick, among many others. We also have a very young shooter that day! The boy received a juice box camera from Leslie which was really cute. 🙂 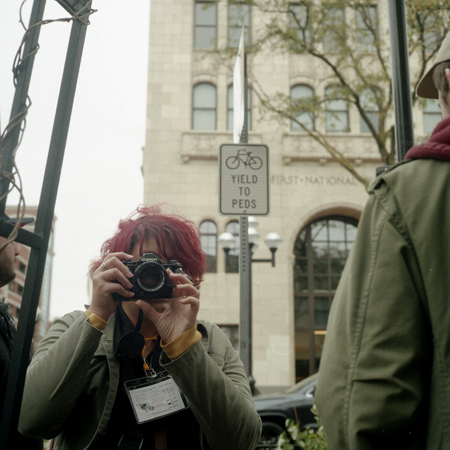 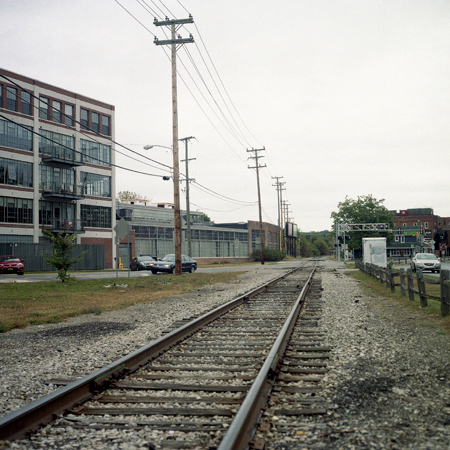 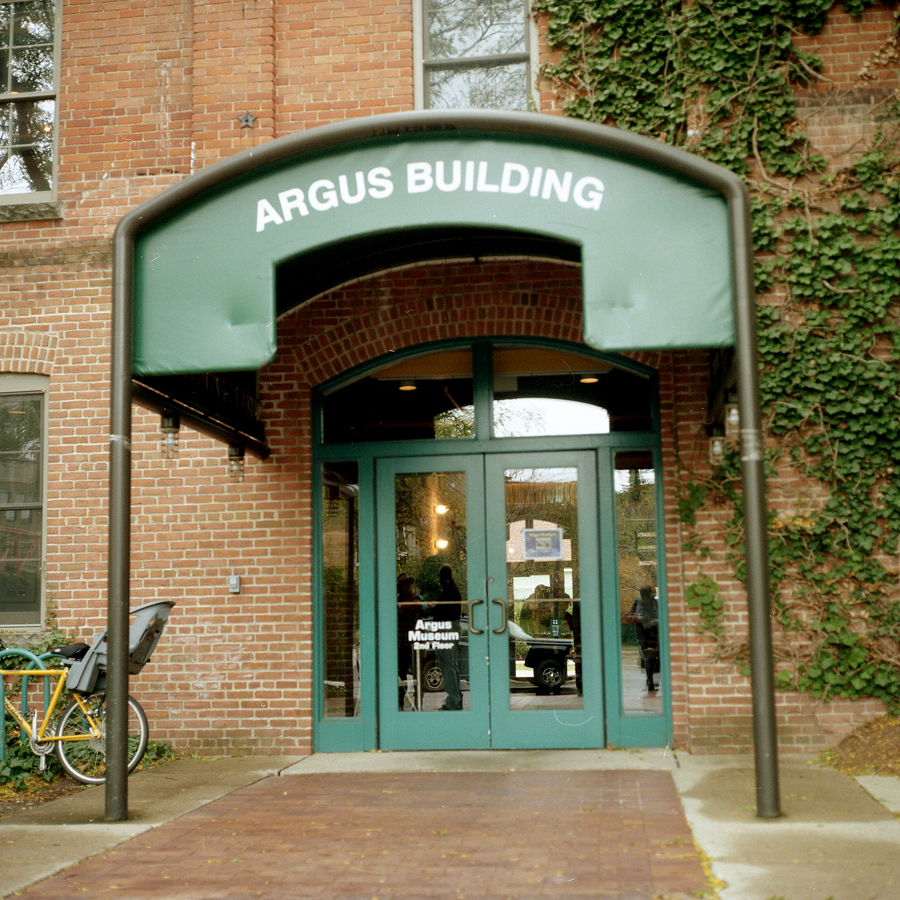 Soon after the rest of the (big) group arrived at Argus Museum (525 West William). Argus Museum is the only museum where the cameras are displayed in the same building where they used to be manufactured! It was an interesting place to visit. The museum team headed by Cheryl also welcomed us with cider, coffee, and doughnuts. She was also very gracious in answering questions, and she also told us of the current cyanotype exhibition that were displayed in the museum during our trip. 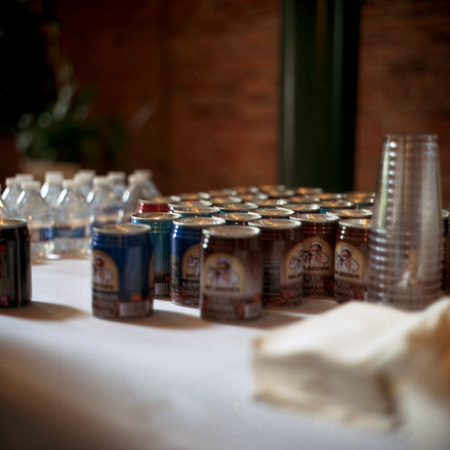 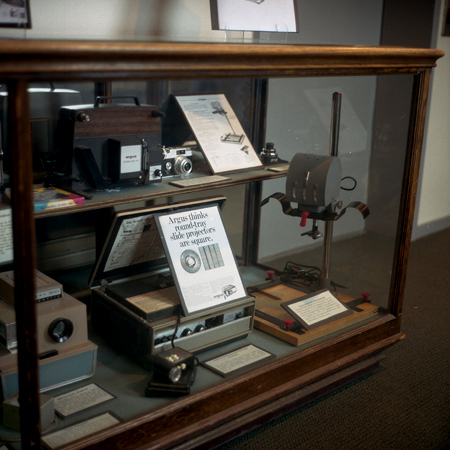 Oh, did I already say coffee, because Mat provided more coffee in the form of the show favourite, Mr. Brown!

We did a quick tour of the place and again chatted with the rest of the attendees. Everyone’s attention were called later as we saw the popular FPP Give-Away table being set-up! Shortly after winners were drawn. I was eyeing the Zenit 412LS but sadly lost. My husband ran out of luck as well. :p

We then had a great big group photo taken via large format by Mat and Leslie! After more chatting we all said our goodbyes; Kelvin and I were looking forward to hit the shower after a long day.

Kat offered to take us to our hotel when she found out that we’re figuring out where we can hop on the bus. We then arrived to our hotel, a sanctuary in the midst of a cold and rainy weekend. After resting for a bit, we decided to head back to downtown Ann Arbor and had dinner at Frita Batidos (117 W Washington Street). We enjoyed our choice of frita but what we liked the most were our garlic-cilantro fries and our batidos (coconut and passion fruit). We walked a bit and took more photos (we did not join the evening FPP walk) before heading back to our hotel. We got a bit confused with what bus to take. Fortunately our lovely bus driver was very helpful – apparently her bus routes change and the second route she will be taking was the one we need, so she told us to hop on the bus to keep ourselves warm as she completes the first route before she heads back to the station to switch bus numbers. 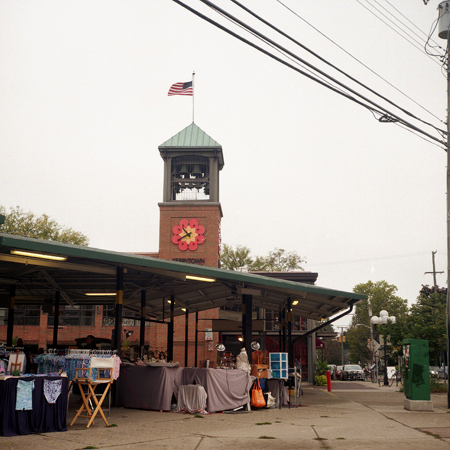 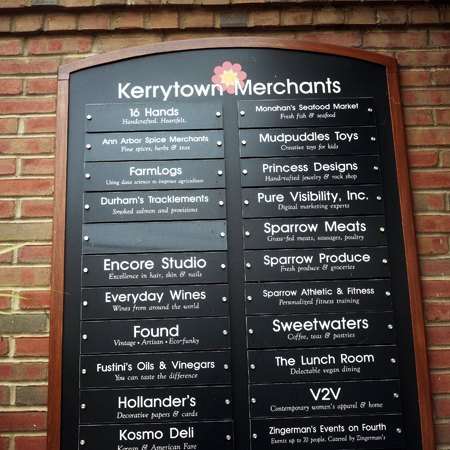 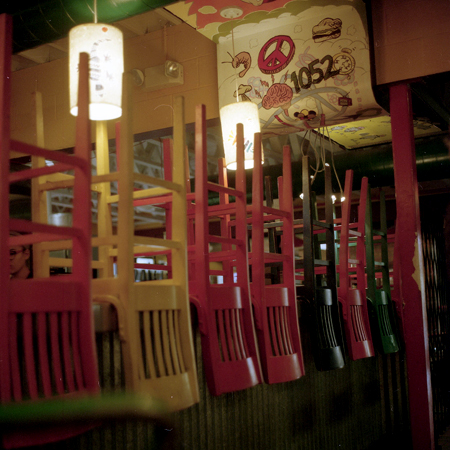 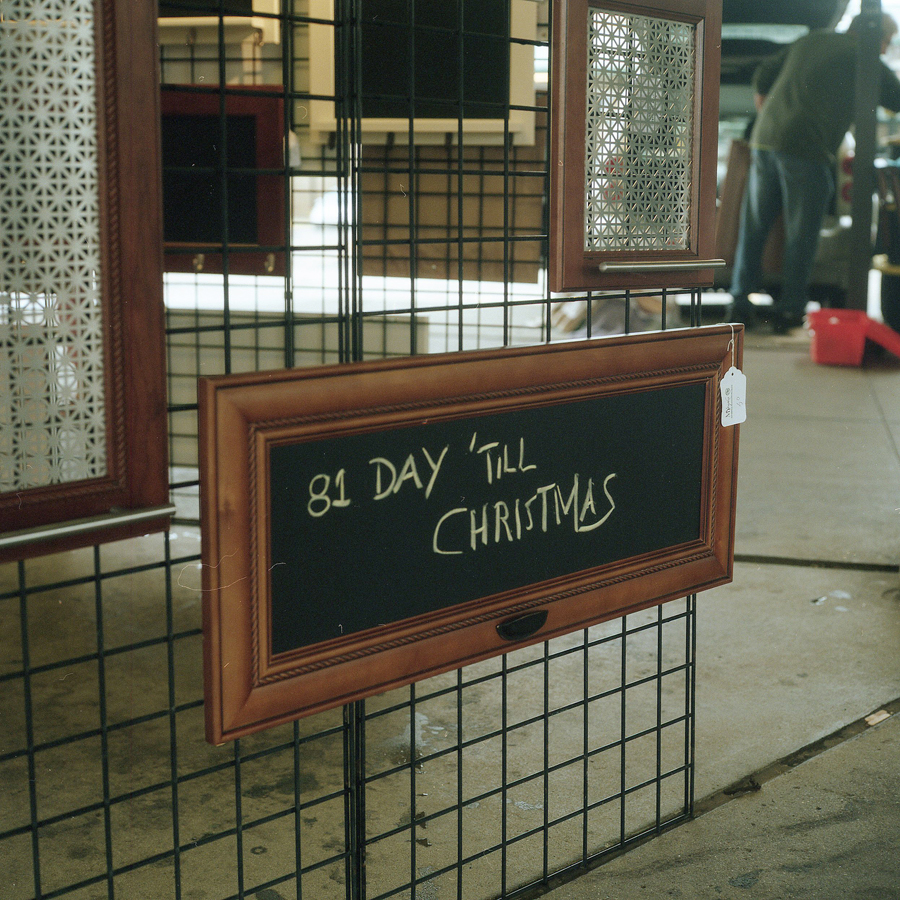 The next day we had a quick breakfast in our hotel (thank goodness for family chain hotels), left our hotel and went back to Downtown Ann Arbor. Our bus will not be arriving until noon, so we decided to take a few more photos and head to Kerrytown (407 N. 5th Avenue) to have lunch at Monahan’s Seafood Market. UNFORTUNATELY, they do not serve lunch on a Sunday which devastated my husband (he has been craving for fish and chips). 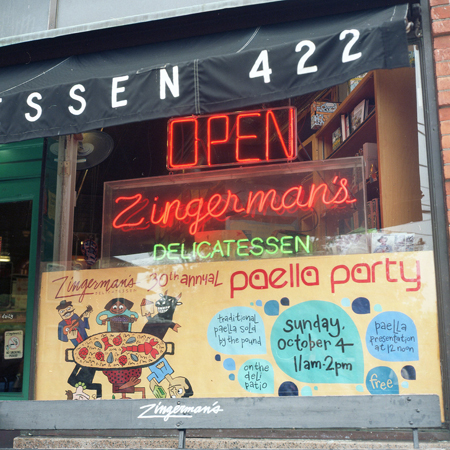 Since we were in the area and our time cannot afford to eat-in, we decided to buy food to go at Zingerman’s Delicatessen (422 Detroit Street) instead for lunch and ordered J.V.W.’s Detroit St. BBQ. It was only back in Detroit’s Greyhound station that we found out that this sandwich was so heavenly (not to mention the pork and beans!) that we should have opted to get the big sandwich: we were told that the regular sized sandwich is already good for sharing, but it was just so good that we knew we had to have more! 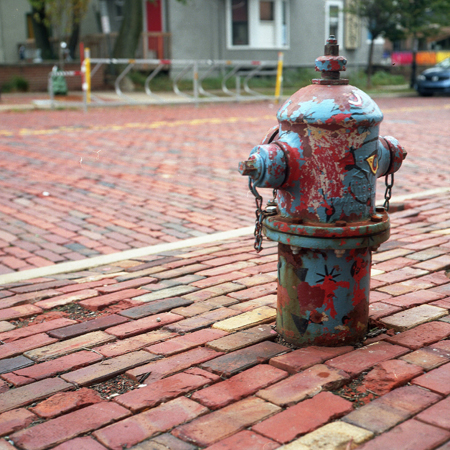 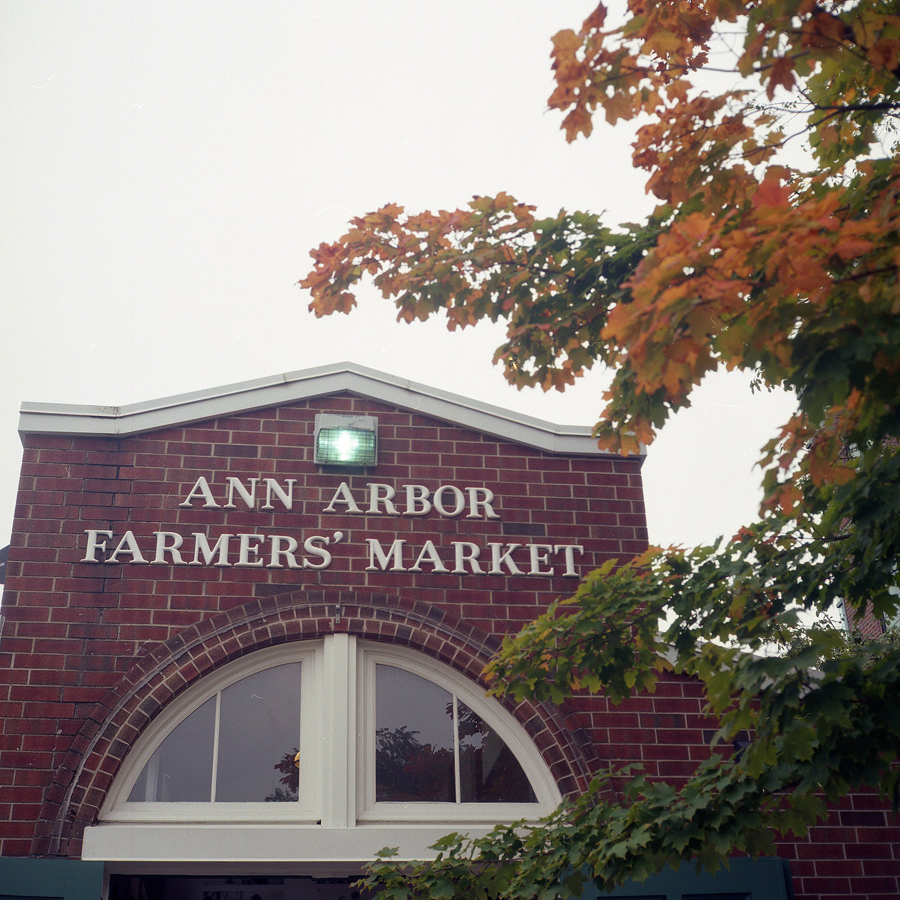 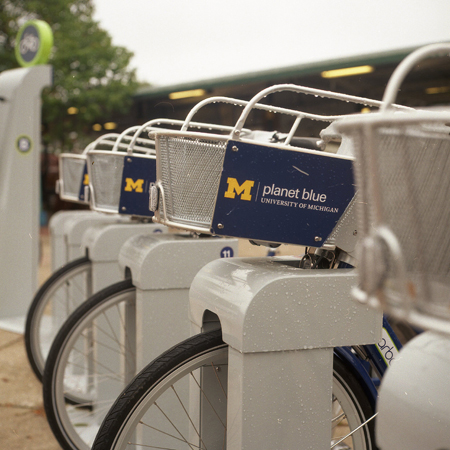 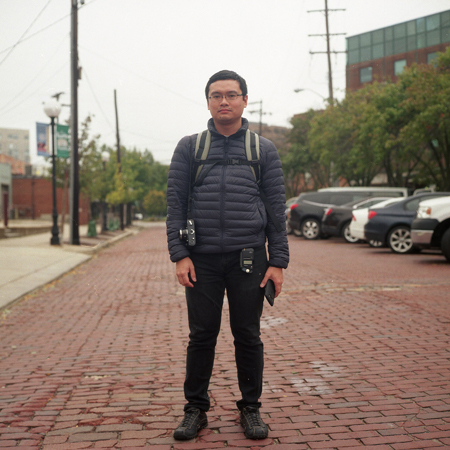 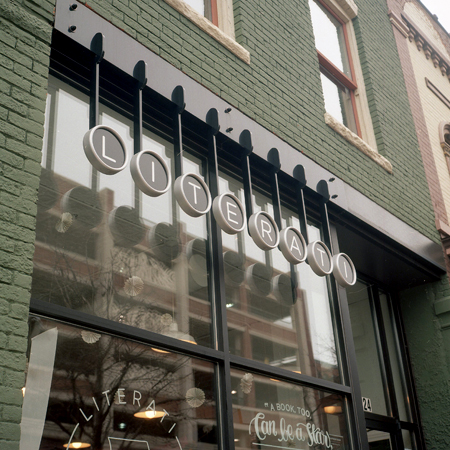 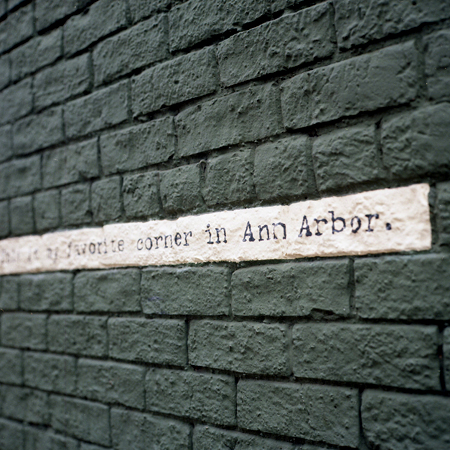 In between this Sunday morning’s “let’s find a place to eat” time, Kelvin and I managed to take more photos. I was ecstatic that I was finally able to use my Ektar films as it was bright enough to be used (plus it was not rainy). We then walked around the Kerrytown area and snapped away. 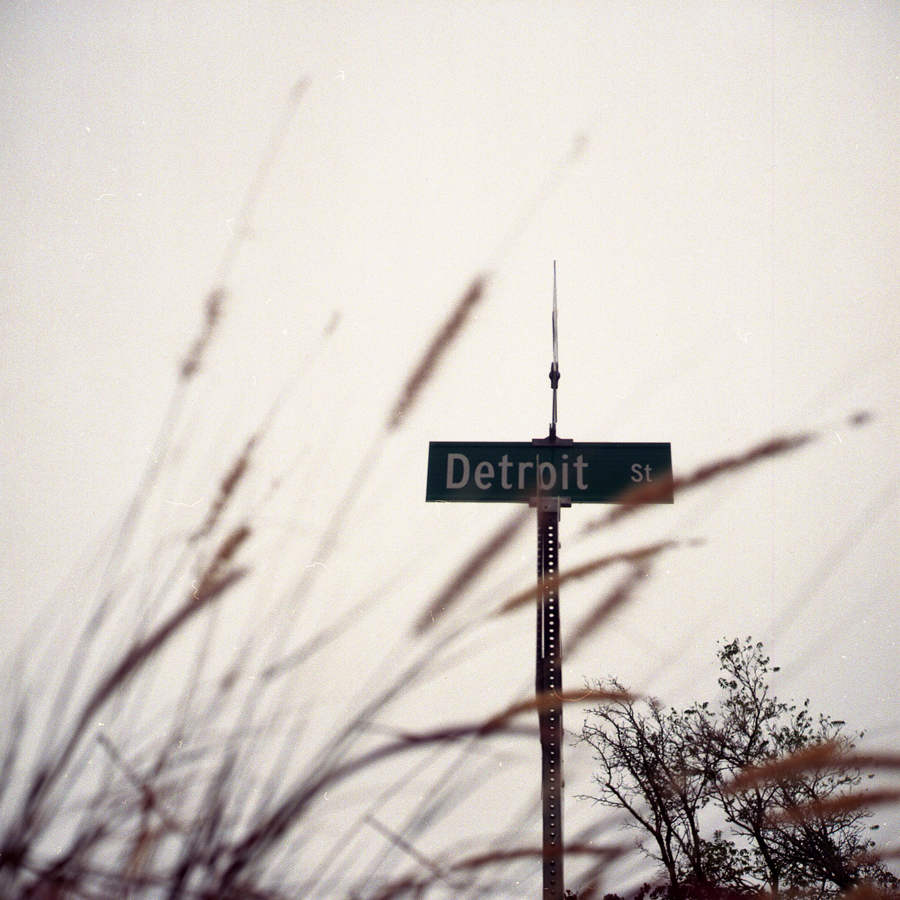 Then it was time to head back to the Blake Transit Station to take our bus to Detroit, then back to Canada.

* On a side note, since we took the trip during the day, it just really baffles me that the Canadian route of this trip was actually longer than heading to Ann Arbor itself. The Detroit border is just around 5-10 minutes away from the Windsor Greyhound bus station and another 5-10 minutes to arrive at Detroit’s Greyhound station. I slept from Detroit and woke up a few times and I was still somewhere in the middle of Windsor and London, Ontario. We arrived in Toronto around 7:30 in the evening and due to the cold weather we experienced over the weekend we decided to pay Baldwin Street a visit and had a nice warm dinner of pork ramen at Kinton.

MARCH 18, 2011 - Friday night with Sybil. In fairness maaga kaming umuwi because I have classes the next day!
I had this great idea to spend my Friday afternoon (after work) to take photos at Vimy Ridge Memorial Park.…